A guide to accessing resources at the W.S. Hoole Special Collections Library.

To find items from Hoole through Scout, you can limit any search by choosing Hoole Special Collections Library as your Location, either in the lefthand sidebar or during an advanced search. 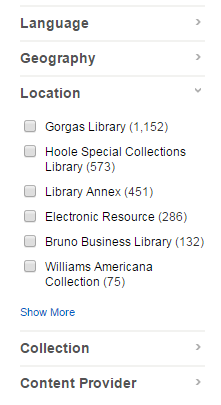 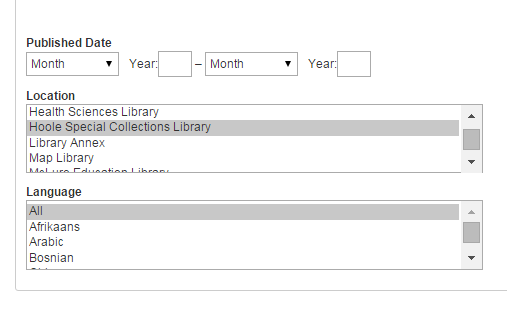 Using the Libraries' Classic Catalog, you can limit a search to Hoole materials by choosing Hoole Library from the Limit To dropdown.

The Rare Book Collection at the W.S. Hoole Special Collections Library is rich. It includes incunabula, titles from seventeenth and eighteenth century France and Britain, and eighteenth, nineteenth, and twentieth century American works, including significant holdings documenting the Mississippi valley and travel and exploration in early America. Additionally, there are significant holdings relating to New Orleans and Louisiana.

The Hoole Library is also home to a sizable collection of Confederate Imprints and a number of nineteenth and early twentieth century works on the Civil War.

Named collections housed in the Hoole Library include the works of author and translator, Lafcadio Hearn and first editions of Sir Walter Scott, the poet Robinson Jeffers, and the library of 20th century poet and professor, George Starbuck.

Significant holdings of first editions by authors such as Mark Twain, Ralph Waldo Emerson, Henry James, Paul Lawrence Dunbar, and John A. Williams are part of the Rare Books Collection.

The Alabama Collection is a continually expanding collection consisting of published materials in a variety of formats, made up of publications in whole or in part about Alabama, by Alabama authors, or published in Alabama. Among the Alabama Collections' many strengths include: local and county history materials; pamphlets and other ephemeral publications pertaining to Alabama and aspects of Alabama history, life and culture; books by Alabama authors of all kinds; publications by University of Alabama faculty; and books printed during the Civil War in Alabama.

Published UA materials such as course catalogs and bulletins, telephone directories, football media guides, and other such publications.

Alabama authors and publishers are encouraged to contact us with information on books and other publications not currently held in our collections. Our Alabama Collection is continually growing, and recommendations and information about published materials from Alabama or about any aspect of Alabama are welcome.

This collection of books, serials, and newspapers relates to the history, law, and literature of the American South through works of noted authors such as, but by no means limited to George Washington Cable, Joel Chandler Harris, Mark Twain, Erskine Caldwell, Jesse Stuart, Tennessee Williams, James Agee, William Faulkner, Robert Penn Warren, Truman Capote, Sue Grafton, and others.

The Smith Collection consists of several hundred volumes, published between the late eighteenth century to the present that document facets of drug and alcohol use and abuse in the United States. Holdings represent such historical phenomena as the Temperance Movement (especially the role of the Washingtonian Society during the 1840s), Prohibition, and the rise of the modern Recovery Movement (especially the origins of Alcoholics Anonymous).

On the premise that so multifarious a subject demands the differing perspectives and methodologies of various academic disciplines, the Smith collection places narrative histories beside medical texts, political and moral polemics, psychological and sociological investigations, biographies and autobiographies, as well as literary expressions in fiction and poetry.

Assembled over two decades by John W. Crowley, Professor of English at the University of Alabama, this collection has been presented by him and his wife, Emily Smith Crowley, in honor of her parents, Jeanne N. and Joseph M. Smith, who died a month apart late in 2005.

The Book Arts Collection is comprised of a wide range of handmade books and fine press titles crafted by contemporary artists and was developed to support The University of Alabama MFA program in Book Arts. The collection includes both student and professional book artists work, as well as some of the most renowned book artists in the world. The Hoole Library's extensive Book Arts Collection features contemporary bookbindings and unique artist books along with books from the world’s fine presses and printers, as well as broadsides, and "the archive of decorated papers", an impressive collection of decorated papers which allow users to better understand techniques and methods for creating such works. These materials are used on a regular basis by students in the MFA program in book arts, as well as students in Art, Graphic Design, Library and Information Studies, and in other areas.