Some useful general sources spanning these periods are listed at the bottom of the page. Others are listed in multiple sections, where they would be the most useful. 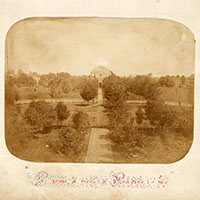 The University opened in 1831. In 1860, it transitioned to military discipline, which it continued during the Civil War (1861-1865), when it served as a training ground for future Confederate soldiers. In April 1865, most of campus was burned by the Union army. Only four buildings survived: the President's Mansion, the Gorgas House (known as Steward's Hall), the Round House, and the Observatory (now Maxwell Hall). 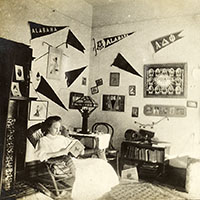 By the early twentieth century, the school was fully co-ed, though women would be subject to different academic standards and rules for decades to come. All of the remaining buildings flanking the Quad were built during this time, the yellow brick structures in the late 1900s-1910s and most of the rest in the 1920s. During WWI, some students left campus to serve in the military, and campus was used for training exercises. During WWII, the scale of both student service and campus use for training was much greater. 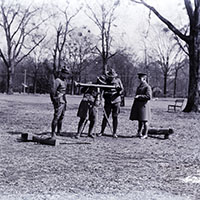 After its destruction during the Civil War and the building of Woods Hall in 1867, the University re-opened in 1871. It was still under military discipline, which would not end until around the turn of the twentieth century. Several more buildings had been added to the campus in the 1880s, all at the north side of the modern Quad: Manly, Clark, Garland, Tuomey, and Oliver-Barnard Halls. 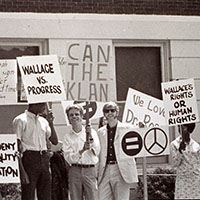 As a more socioeconomically diverse group of students entered American colleges due to the G.I. Bill, this period also saw the desegregation of institutions of higher learning in the South. The first attempt to integrate UA was in 1956; integration was finally accomplished in 1963. In the late 1960s and early 1970s, the campus saw a wave of protest activity regarding the Vietnam War, civil rights, and women's rights.