The South: Culture and History: Hispanic-Americans

Hispanic Americans have lived in Florida, Texas, and other parts of the South since the 1500s and 1600s.  In fact, the first permanent European settlement in North America was St. Augustine, Florida in 1565, established by Spanish colonists.

For current data on Hispanic populations in Southern states, please see the U.S. Census Bureau web site.  The Demographic Profile of Hispanics in Alabama focuses on this state.

The Encyclopedia of Alabama and "Mexico in the Heart of Dixie" talks further about Hispanic migration to Alabama.

A few good books about Hispanics in the South are:

Latino immigrants and the transformation of the U.S. South / edited by Mary E. Odem and Elaine Lacy

Under Siege: Life for Low-Income Latinos in the South

Academic Search Premier-Very useful for starting an article search.  Contains articles from hundreds of scholarly and popular periodicals. You can limit your search to scholarly articles by check marking the “Scholarly (Peer Reviewed) Journals” box before you search.

Ethnic NewsWatch--English and Spanish-language newspapers, magazines, and journals published by Hispanics in the United States and elsewhere.

Google Scholar--a special part of Google that only finds scholarly articles.  As a UA student, you can access the texts of many of these articles by clicking the links that say "Full-Text @ UAlabama” and then clicking one of the crimson "Article" links in the pop-up box that appears.

Handbook of Latin American Studies--the single most valuable resource for citations appearing in journals, as well as chapters in edited volumes, books, and some government documents. Most of the materials are not full-text, but you can search in the Libraries’ Catalog to see if UA has copies.

Hispanic American Historical Newspapers, 1808-1980--"Including many newspapers published bilingually in Spanish and English in the United States, Hispanic American Newspapers, 1808-1980 offers a diversity of unabridged voices, ranging from intellectuals and literary notables to politicians, union organizers and grassroots figures. Coverage begins in 1808 when the first Spanish-language newspaper in the United States was printed in New Orleans."

Latino News--Spanish news articles for Hispanic-Americans in Alabama, Tennessee and other places.

Opposing Viewpoints Resource Center--offers arguments for and against social policies such as immigration and language.

Project Muse--journal on culture and history, covers many Hispanic topics.

Research Library Complete—contains articles from hundreds of scholarly and popular periodicals.  You can limit your search to scholarly articles by check marking the “Scholarly journals, including peer-reviewed” box before you search.

You can search for books at UA using Scout. Here's what you can expect to see: 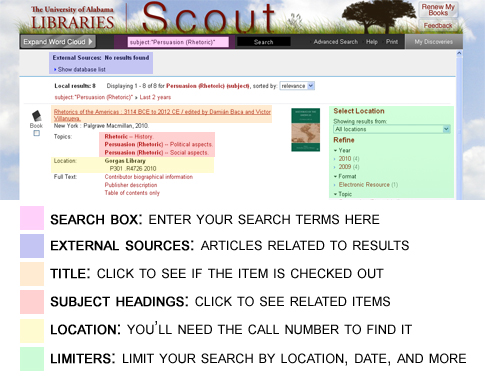 Spanish explorers like Hernando DeSoto were among the first European explorers of the South, and the Spanish established settlements in Florida and Texas very early on in American history.  A great online archive of Spanish history in the early South as well as Latin America is Sabin Americana, 1500-1926.

According to the Oxford English Dictionary Online, Tex-Mex is "a Texan style of cooking using Mexican ingredients, and characterized by the adaptation of Mexican dishes, frequently with more moderate use of hot flavourings such as chilli; food cooked in this style."  It developed when the culinary traditions of Mexican settlers in Texas were fused with Anglo (and Native American) cooking.

Tex-Mex food has spread throughout the South and America.  Here are a few links that explain the history of Tex-Mex cuisine: 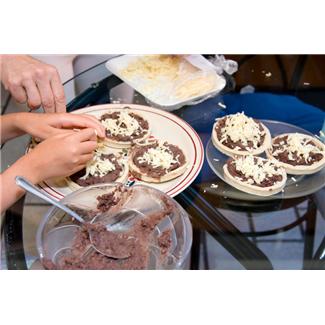